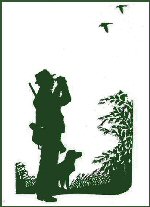 We live in Klaaswaal – the Netherlands – about 25 minutes south of Rotterdam. Ton likes to work with the chessies as picker up, mostly pheasants, ducks and geese and Joa does the huntingtraining, huntingtests and showing.
Since 1985 Ton is a Huntingdogtrainer for the Royal Huntingclub – K.J.V.
Ton had his Nimrod invitation in 1988 with Lonesome Boise Timber his first chesapeake. The yearly Nimrod huntingtest is only for the best huntingdogs of the Netherlands.
Joa got a lot of C and B huntingcertificates starting with her Golden Retriever in 1986 and in the early ninety’s with her Labrador Retriever.
Wild Mountain Suisun (Sue) – Import U.S.A. – was Ton’s personal hunting dog who went with him as picker up from the age of 6 months. She was a naturel talent.
Sue is the one who is in the background of all our later bred Adey May’s chesapeakes.
From 2000 till nowadays with 5 generations Adey May’s bred chesapeakes –
Huntingtests with special highlights:
Adey May’s Maggie May season 2005 – 5 K.N.J.V.- B Huntingcertificates in a row
and her grand grand daughter:
Adey May’s Girl Like Mine – Eve – 6 S.J.P.- B Huntingcertificates in a row in 2017.

We named our kennel after Adey May Dunnell from U.S.A – California who learned us everything about the Chesapeake, no matter what, hunting, health, breeding she knew it all.

Once a year or two years we have a litter but only for those people who want to give their chessie the live they deserve. Own hunt or huntingtraining is what we prefer!